My first encounter with Free Software was around 1986 when was a graduate student; I used LaTeX to write reports and my Ph. D. thesis. At that time we used in our university VAX computers and we worked in alphanumeric terminals (VT100). To make the diagrams and plots for my thesis, I discovered the programming language PostScript; I would create a PostScript file using a text editor and send it to a PostScript printer on campus. After picking up my printout at the computer center, I could finally see the result and go back to the terminal to modify the text file. It was very frequent to spend hours to do a simple image, because my file would have syntax or semantic errors. To speed up the process, I decided to write down several Postcript subroutines that I would then reuse just changing the input parameters; that way I managed to reduce the occurrence of errors.

When I started working as a postdoc in Portugal, in 1990, in addition to the VAX computers our group also had PC computers running Windows. A colleague of mine, Helmut Wolters, introduced me to several Free Software programs that we could download and use instead of the standard ones that came with Windows. The two that made a bigger impact on me were the Emacs text editor and Ghostscript, which allowed me to display my PostScript files on the screen or even print them in my own dot-matrix printer.

In 1994, when I was already teaching at the University of Porto, I made my first installation of Linux; I started with the Slackware distribution but later switched to Debian that was maintained a community of volunteer developers. With Linux I could use all the Free Software programs I already knew and I didn't have to use Windows anymore.

In 1998 we formed a Linux Users Group at the Faculty of Engineering (FEUP). Among its members, Raul Oliveira had already set up a local network of PC's running Linux which he used for teaching computer networks to his students; he called that room Reino Linux (Linux Kingdom). We adopted that name for our group. Our first important activity was a Linux Installation Party in which we invited students and teachers to bring a computer and one of us wood install Linux in it, while explaining the process and giving them a short tutorial about Linux. We even offered free CD's with Linux distributions. It was a big success and we had some other sessions later. We also used to have picnics to meet other Linux enthusiasts. 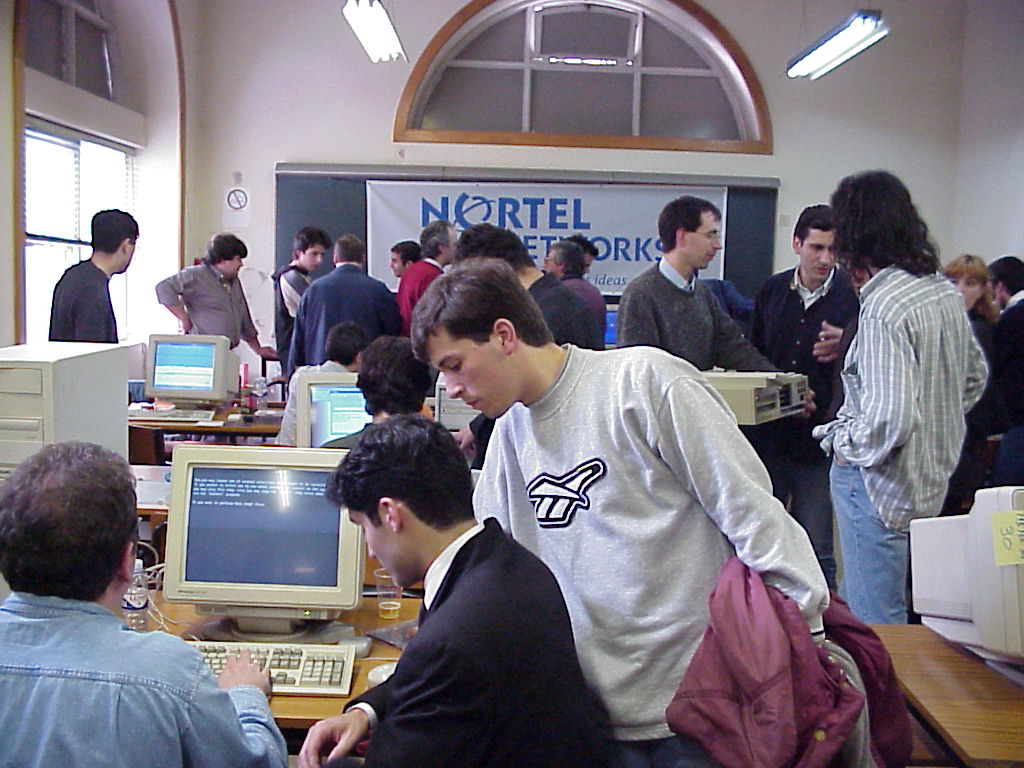 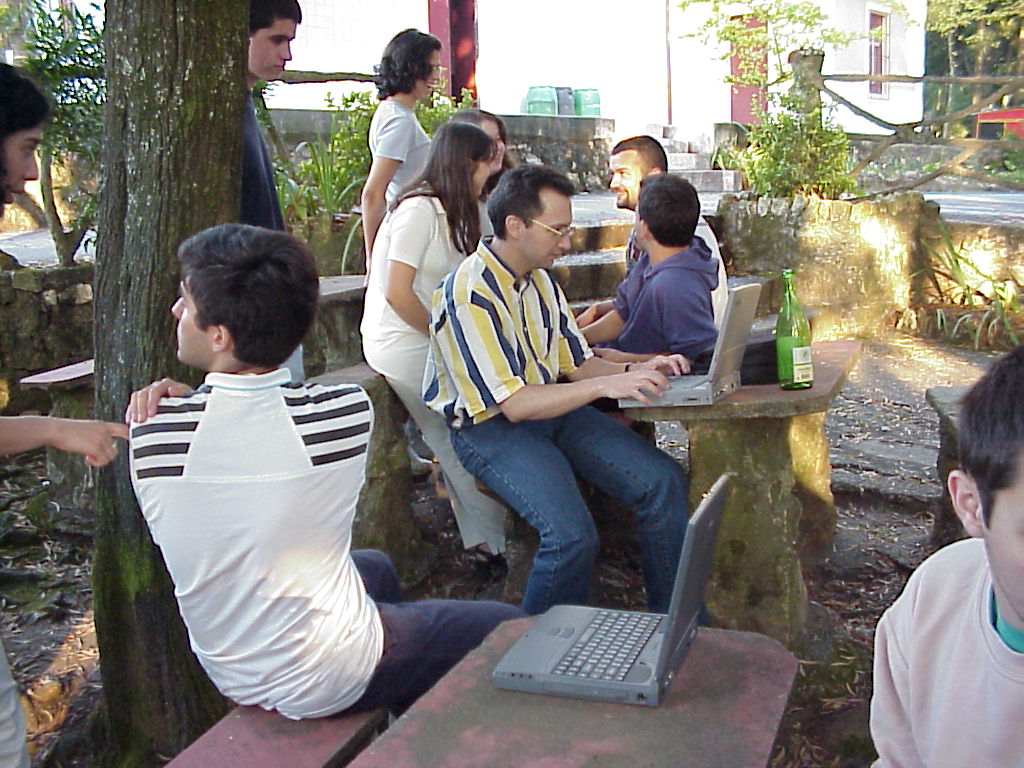 Picnic; seating in the front Nuno Faria and in the back Cláudio Gomes.

In 2000 Raul Oliveira got the support of the mayor of Porto, Nuno Cardoso, to turn our Linux Installation Parties into a city event. The mayor had a tent set up in front of the city hall where we held the event, dubbed as Porto Cidade Linux, Cidade Tecnológica (Porto, Linux city, technological city), on the 14th of July. We had a special guest from Spain, Jesús González Barahona.

The big success of our big installation party led the mayor to turn it into a yearly event which would promote the use of Free Software. The 2001 edition had a more formal organizing committee including members of the city hall and Raul Oliveira and I as representatives of FEUP; since it was no longer a Linux Installation party but rather a Free Software event, it was named Porto Cidade Tecnológica. It was held on October 12th in a landmark building of the city, Mercado Ferreira Borges. We invited Portuguese political figures, the Free Software Foundation which was represented by its vice-president Bradley Khun and the French Free Software Association, APRIL, represented by Loïc Dachary. 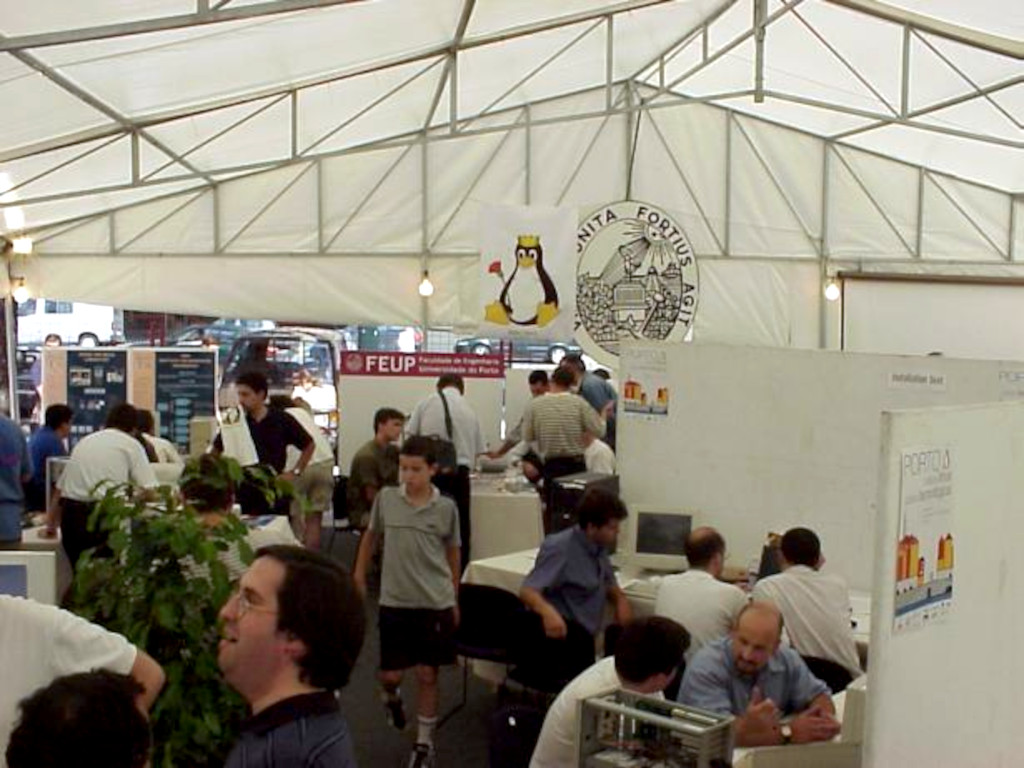 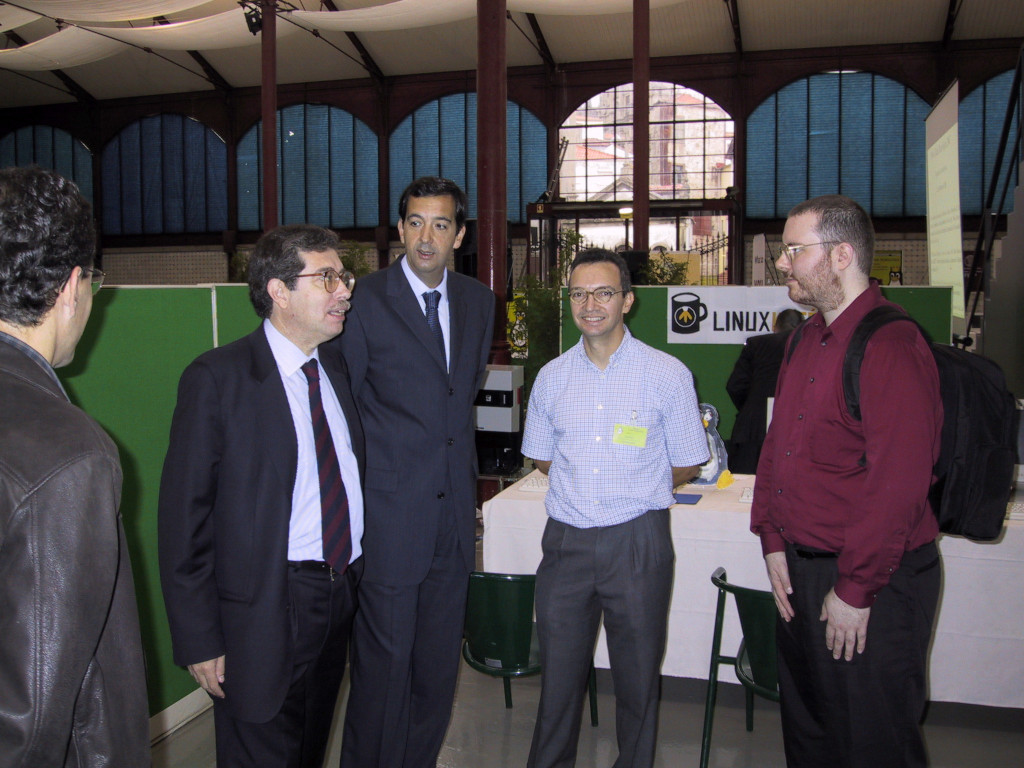 In 2002 the event (Cidade Tecnológica 2002) went on non-stop for two days, between November 29 and 30, with booths for exhibitors and space for computer demonstrations in one of the biggest sports facilities in the city (Rosa Mota pavilion) and lectures in the Almeida Garrett public library. A protocol was signed among Porto's City Hall, FEUP and ANSOL for its organization. In 2003 there was a change of city mayor and the event was never held again.

By 2001 that group of Portuguese users decided to create a Portuguese association for Free Software, following the examples of APRIL and the Free Software Foundation. We named it ANSOL (Associação Nacional para o Software Livre). The announcement of the new association was made during the event Porto Cidade Tecnológica 2001. Following that event we held the first meeting of the association in my house with the following members: João Neves, Rui Miguel Seabra, Rúben Mendes, Rui Leite and Hugo Nogueira, as well as the two international guests of Porto Cidade Tecnológica, Bradley Kuhn (Free Software Foundation) and Loïc Dachary (APRIL). I was the first president of ANSOL between 2002 and 2004.

In 1994, when I heard about the World Wide Web at CERN, I started creating my own Web pages. In the beginning of 1997 created a Website for the Department of Chemical Engineering where I worked. The early versions of that site can still be accessed through the Historical Web Archive.

I wrote some CGI scripts that allowed the teachers to create and update their web pages, using a system similar to what is nowadays know as a Wiki. In 2001 I transferred from the Chemical Engineering Department to the newly created Physics Engineering Department. Between 2001 and 2010 I improved that wiki system to maintain a Website for that new department.

In 2002 I wrote an article arguing why the software we use to deliver courses on the Web should be Free Software (Villate, 2002b) and made a survey of several available free-software learning management systems. Among those systems I chose Moodle and made its first translation into Portuguese. During several years I remained in charge of updating that translation as well as managing the section for Portuguese users in Moodle's website.

In 2005 the University of Porto established a prize that would be awarded every year to the teacher who showed the best use of e-learning systems in a course. The contestants presented their applications for the prize during a workshop open to the public; I was the only applicant using a Free Software e-learning system (Villate, 2005f) and was awarded the prize, ex-aequo with a course from the Faculty of Nutrition and Food Sciences (Porto University Journal — JUP, 2006).

I have participated in several projects related to Moodle and supervised a Masters dissertation (Dutra, 2006) and a Ph. D. dissertation (Marques, 2015) on the subject.

Maxima is a free version of Macsyma (Project MAC SYMbolic MAthematics program), one of the oldest Computer Algebra Systems (CAS), created by project MAC (MIT's Project on Mathematics and Computation) in the late 1960s. It was originally coded for a PDP computer. Around 1982 a version dubbed as Vaxima started to be distributed for the VAX computers. William Schelter, a mathematics professor at the University of Texas, Austin, continued to develop that version while the original Macsyma version became property of the Department of Energy (DOE). In 1998 Schelter was formally granted permission from the DOE to distribute his version as Free Software, under the name Maxima.

After the death of professor Schelter in 2001, a group of volunteers was formed to continue the development and distribution of Maxima. I joined that development team in 2006.

I have developed new versions of the plotting programs, a module for the graphical analysis of dynamical systems, functions to solve systems of differential equations numerically and a combinatorics module. I also maintain the graphical interface Xmaxima and the Website of the project.